Using Hair for the Quantification of Stress 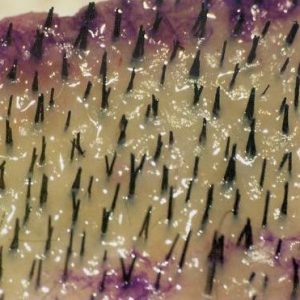 Stress is a commonplace in daily living and nowadays it can be argued that there is not a week—if not a day—that passes by without a person experiencing stress or at least talking about it. Stress can be defined as the body’s response to a stressor, and stressors are of various types, including physical and psychological; likewise, the body’s response can also be psychological (e.g., anxiety) and physical (e.g., diarrhea). Studies have shown that chronic stress is associated with the risk of developing serious health conditions, including hypertension and diabetes mellitus; in addition, skin disorders such as acne and eczema can also result from stress. The symptoms of stress can be morbid such as forgetfulness, fatigue, instability of weight, and so on (1). Given that stress has debilitating symptoms and can predispose an individual to grave health problems, its quantification would not only be beneficial in clinical decision making, but would also be relevant for research purposes; being able to quantify stress enables it to be studied quantitatively—and not just qualitatively.

Stress can be quantified through self-reports, blood pressure measurements, cortisol concentration, and so on. Cortisol is a hormone that is endogenously produced in humans and the concentration of this hormone can be determined from a person’s blood, saliva, urine and hair. Cortisol from hair has been deemed to be a reliable way to measure stress (2,3). The topic of this post is on hair cortisol concentration being used as a measure of stress in humans.

Cortisol is produced in response to stress and is known as the body’s primary stress hormone; it is released from the adrenal glands, and the hormone’s production is regulated by the hypothalamic-pituitary-adrenal (HPA) axis that is located in the brain. Cortisol responds to stress by effecting processes that enable a person to (1) cope with or (2) escape a stressor; for example, the body’s primary stress hormone increases blood glucose concentration, which consequently results in a person having more energy for the ‘fight-or-flight’ situation (4). Cortisol has recently become an objective measure of stress, and the possibility of quantifying this hormone from hair was first realized in 2004 (5). Compared to biological specimens like blood, saliva and urine, hair permits the quantification of the body’s primary stress hormone over a much longer time period (e.g., up to three years); quantification of cortisol through the other three biological specimens tend to be valid for up to 24 hours (5–7).

How does cortisol end up in hair?

Every hair strand is formed by a ‘hair follicle’ that is continuous with the bloodstream through the capillaries; macronutrients, drugs, hormones, etc., that are present in the circulatory system are incorporated into the hair follicle by virtue of such substances being in the blood stream (7–9). Researchers have stated that the exact mechanism through which cortisol is incorporated into hair remains unclear; nonetheless, various mechanisms have been proposed and a prevailing hypothesis is that cortisol passively diffuses from the blood stream into the hair follicle (6,9,10).

What are the advantages of using hair to measure cortisol?

As mentioned earlier, using hair to quantify stress has numerous advantages. For instance, cortisol is produced in a circadian manner wherein its level is highest and lowest in the morning and at night, respectively; this circadian pulsatility affects the hormone’s concentration in blood, urine and saliva. On the other hand, the hair’s concentration of cortisol is unaffected the hormone’s circadian rhythm—which thereby enables hair to be used for reliably measuring cortisol levels over time. While obtaining a hair sample is completely painless, each of the three aforementioned specimens are relatively more invasive to sample—with blood being the most invasive as it is sampled through venipuncture. In terms of shelf life, hair is the most efficient; while the other three specimens can only be stored by freezing (which requires electricity), hair can be stored at room temperature (6). 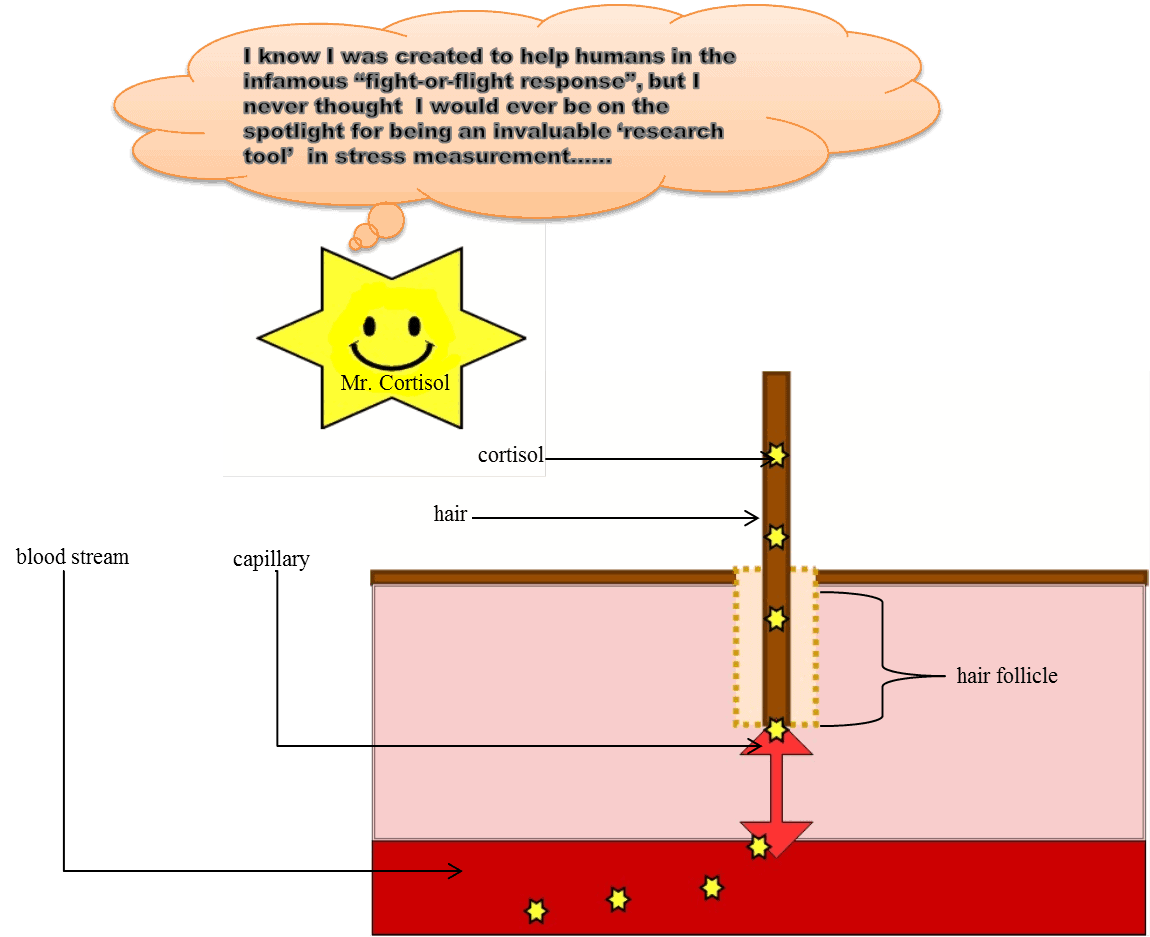 How valid is hair cortisol concentration as a measure of stress?

As per the current literature, there isn’t a singular response to this very broad question as the postulated inquiry at least begs the question of whether all stress are the same; for instance, is the association between hair cortisol concentration (HCC) and the occurrence of a particular psychiatric illness similar to that between HCC and the occurrence of a stress-related condition that is non-pathological (as in being stressed over an upcoming exam)? The literature also points towards an answer that is not singular; after we briefly reviewed the literature, we could not find at least one journal article that reported the sensitivity and specificity of HCC in the quantification of stress. Rather, studies were conducted to identify whether there is an association between hair concentration of the body’s primary stress hormone and the occurrence—as well as the severity—of specific health conditions (e.g., major depressive disorder, post-traumatic stress disorder, and so on) (11). An example of such study is the one published by Luo et al., (2012).

On May 12th of 2008, the Great Wenchuan Earthquake occurred in the Sichuan province of China, and Luo et al., (2012) performed a case-control study where HCC was quantified before and after the occurrence of the natural disaster. The study subjects were schoolgirls aged between 12 and 15 years; Luo et al., (2012) quantified HCC in subjects who were diagnosed with post-traumatic stress disorder (i.e., the PTSD group), who were traumatized but not diagnosed with the psychiatric illness (i.e., the non-PTSD group), and who had no diagnosis of any psychiatric illness (i.e., the control group). The study showed that there was no significant difference in HCC among the three groups before the earthquake; by one month after the natural catastrophe, HCC in both PTSD and non-PTSD subjects were significantly higher compared to the controls. By seven months after the earthquake, the two traumatized groups (i.e., PTSD and non-PTSD subjects) had higher HCC than the controls—albeit, the HCC of the non-PTSD subjects was relatively higher than that of their PTSD counterparts. Luo et al., (2012) concluded that the scenario of the non-PTSD group having higher HCC than the PTSD group could reflect a protective mechanism whereby the HPA axis was over-stimulated to prevent the psychiatric illness from developing in the non-PTSD subjects; the lower HCC in the PTSD group could be due to the HPA axis ‘shutting down’ or becoming malfunctioned due to over exhaustion from the disorder.

Though many studies have investigated the association between hair cortisol concentration and stress, future epidemiological studies in this genre of research would shed more light on the relationship between HCC and stress. Notwithstanding the fact that a randomized trial (i.e., the gold-standard study design for inferring causality) would permit stronger inferences than that from observational studies (i.e., non-randomized), the relationship between stress and HCC cannot—or will never be—studied using the gold-standard approach by virtue of ethics because a human subject cannot be randomized to harm—or even perceived harm. So, using an epidemiological approach on observational data would lead to meaningful inferences as such approaches address selection bias—which is a threat to validity that results from study groups being different in factors that affect an outcome of interest. For instance, in a hypothetical study where the effect of smoking on risk of developing cardiovascular disease (CVD) is being investigated, selection bias would occur if the group of non-smokers had 90 per cent of its subjects diagnosed with diabetes mellitus, while none of the smokers had diabetes, which (in reality) is a metabolic disorder that predisposes an individual to developing CVD. With more evidence to support HCC as a valid quantitative marker of stressful states, the pathophysiology of various health conditions would be better understood; moreover, such markers could consequently be instrumental in the innovation of therapies.