How Does Sebum affect hair loss? 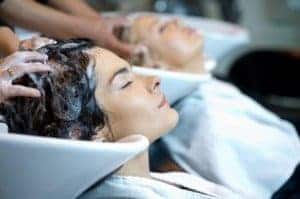 Sebum is a substance that is mostly produced and then excreted by the skins sebaceous gland. It coats the hair follicles, traveling though the follicles pore to reach the skins surface. When it reaches the skin, it combines with lipids (oil) and sweat to form a fine acidic coating called the acid mantle protecting the skin from bacteria and viruses keeping the skin moist and hydrated.

As with most situations regarding our body, our scalp naturally needs a good balance of sebum. Over production of sebum on the scalp may result in under nourished roots. When too much sebum builds up on the scalp, it eventually hardens and hinders the growth of healthy hair. Under production of sebum can also effect the growth of hair. Not enough sebum creates undernourished hair. The hair becomes dry and brittle, resulting in hair loss and breakage.

Sebum is an important part of hair health, but when a person is going though hair loss, the sebum also acts as a carrier for DHT, a hormone that is central in the loss of hair. DHT treats your follicles as foreign objects in your body like an autoimmune response and rejects the follicles. Without a DHT inhibitor in the bloodstream (systemically) or topically on the scalp, DHT forces the follicles to decay and shorten the anagen phase. Sebum it’s self does not kill the hair, but it is a carrier for DHT, and for those with DHT sensitive hair it becomes a problem.

Sebum production is effected by hereditary, unhealthy eating habits, medications, improper hair care, change of the season, climate changes, hormone fluctuations and longer periods of stress. The best way to deal with overproduction of sebum is to wash your hair regularly with products that restore the balance. Our SureThik Root Penetrating Shampoo contains String Nettle, and Sage which are very helpful natural treatments in the removal of excess sebum. Other natural ingredients to look for are seaweed, horsetail, rosemary, coltsfoot and chamomile.