Why do we get gray hair? 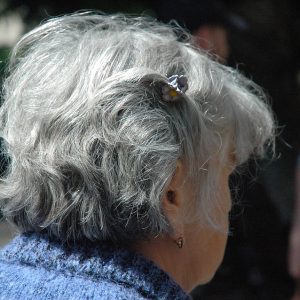 Have you ever heard the phrase ‘fifty percent of people are fifty percent gray by the age of fifty’1? Turns out this rule of thumb might be a myth.

A few years ago, several scientists tested this idea in a study that consisted of 4,192 healthy individuals2. Using categories like age, gender, ethnicity and geographic origin, patterns amongst grey-haired individuals emerged2. As we could have guessed, these scientists found that the number of grey-haired individuals increased with age2. However, it was also discovered that only about  23% of these individuals were 50 percent gray at age 502. This is good news for those of us who are closer to 50 then we’d like to admit. But is it possible to avoid greying altogether?

To avoid graying, limit your risk factors. Some risk factors for premature greying (greying before the age of 30) can include weight, genetics, stress, alcohol consumption and UV radiation3. Smoking can also be a contributing factor. Toxins found in cigarettes can cause damage to hair follicles and can alter your hair cycle2.

There are some risk factors however that may not be avoidable such as ethnicity. For example, in the study discussed above, the lowest frequency of greying was found in Sub-Saharan African and African American individuals2. Autoimmune disorders (e.g., vitiligo, pernicious anaemia etc.) can also cause greying. In these disorders, actively-growing pigmented hairs are attacked by the body4. Increased amount of grey hairs and hair loss can be the direct result of these autoimmune conditions.

Can we do anything to help cover the grey? Since grey hairs are missing their key colour ingredient (melanin), hair colouring can be an effective way of dealing with grays5. Permanent dyes are suggested as they are the most effective hair colouring option for grey hair. Purchasing a hair system is an alternative option to help camouflage those greys.