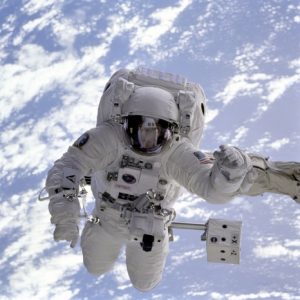 Can you imagine soaring across the stars? Or getting to see the dark side of the moon? Astronauts may get to experience these amazing opportunities but at quite a sacrifice. And I’m not just referring to the dehydrated packages they call food. There are a number of serious health implications associated with spaceflight. Examples of health implications can include calcium loss and deterioration of muscles1,2. But does spaceflight affect hair?

The Japan Aerospace Exploration Agency (JAXA) has been trying to address this question since 2009. They have been taking hair samples from astronauts before, during and after spaceflights3. These scientists are hoping to use hair as a tool for monitoring the health of the astronauts during missions. Through examining hair they hope to discover the stress level of astronauts, as well as mineral and calcium levels3. Hair can also reflect the type of sleep schedules the astronauts keep during the mission. This is based on the fact that hair can imitate a person’s circadian rhythm, their biological clock4.

This is just one of the many hair studies conducted during spaceflight. Astronauts as well as mice have had their hair examined during their visits at the International Space Satiation (ISS). Mice, during their 3 month visit to the ISS, showed alterations in their hair follicle cycle5. It was found that these mice had an increased amount of hair follicles in the growth phase5.

Additionally, the astronauts at ISS also participated in a hair study. During a 6 month mission, ten astronauts periodically took samples of their hair6. These samples were studied when they returned to earth. It was found that some astronauts had experienced changes in their hair follicles that differed according to gender6.

Overall it does seem like spaceflight does impact hair. With a trip to Mars on the horizon, further information on the effect of spaceflight on hair follicles might be upcoming.